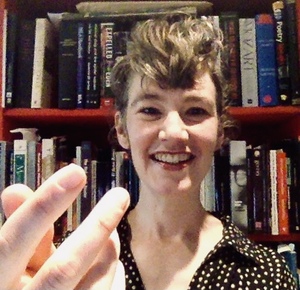 Amanda Jo Goldstein, from the University of California, Berkeley, is the Barbara L. Packer guest lecturer in 2020-21. On April 12 she will speak on “Black Seminole Romance and the Dialectics of Nature.”

“Black Seminole Romance and the Dialectics of Nature” looks to freedman-poet Albery Allson Whitman’s epic counter-history of maroon ethnogenesis and resistance on the U.S. southern frontier in the 19th Century, testing the limits of both high Romantic nature poetry and recent Marxist ecology.

Amanda Jo Goldstein specialize in Enlightenment and Romantic literature and science, with particular interests in rhetoric and poetics, pre-Darwinian biology, and materialist theories of history, poetry, and nature. Her book, Sweet Science: Romantic Materialism and the New Logics of Life (University of Chicago Press, 2017), shows how writers from William Blake to Goethe, Percy Shelley and the young Karl Marx revived ancient atomist science to argue for poetry as a privileged technique of empirical inquiry, especially when it came to representing the new problem of biological life in its dependency upon broader social and natural histories. The book has been awarded the Kenshur Prize for an outstanding monograph of interest to eighteenth-century scholars and the MLA Prize for a First Book (2018). A new research project takes up the ecology of utopia in the early socialist projects dubbed “Romantic” and “Utopian”; another seeks the poetic and scientific roots of the “new” concepts of biosemiosis and plasticity in the long history of epigenetic neuroscience.

This series was established in memory of our beloved Emeritus Professor, Barbara Packer.  Barbara was not only the most distinguished scholar of Emerson to emerge since the Emersonian revival of the mid-1960s, but she also was a most generous colleague and teacher whose vivid intelligence, warm humor, and true grace were daily gifts to all who knew her. While Barbara’s path-breaking scholarship on Emerson and other nineteenth-century American authors was marked, in the words of her teacher, Harold Bloom, by “a warmth and generosity … unmatched elsewhere,” in Barbara we all encountered “a mind that startled us by its large scope,” to use Emerson’s words.   One of a small band of scholars who edited Emerson’s works for Harvard, she wrote the historical introduction to his late work, The Conduct of Life (2007). Her account of the Transcendentalist movement in the Cambridge History of American Literature (1995) was later published as The Transcendentalists (2007), which Joel Myerson has called “the best extended study of Transcendentalism available.” She held a Visiting Professorship at Columbia in 1987 and was a Fellow of  the Stanford Center for Advanced Study in the Behavioral Sciences in 1989-90.