The departmental event is a smaller, more personal ceremony for our graduates and their families. You will be able to celebrate your accomplishment with your fellow classmates and the English department’s faculty. Around 250 English and American Literature & Culture majors participated last year. 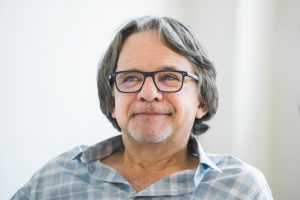 Award-winning Executive Producer and writer, Frank Spotnitz is the Chief Executive and Founder of Big Light Productions, and began his 20+ year career with The X-Files.

Spotnitz recently co-created and executive produced Medici: The Magnificent, starring Daniel Sharman and Sean Bean, and Medici: Masters of Florence, starring Richard Madden and Dustin Hoffman, for RAI in Italy, SFR Play in France and Netflix in the UK, US and Canada; Ransom for CBS in the US, Corus’s Global in Canada, TF1 in France and RTL in Germany; and the comedy-drama series The Indian Detective, starring international comedian Russell Peters, for Bell Media/CTV and Netflix. The third seasons of Medici and Ransom are currently in production.

Spotnitz created, executive produced and wrote several episodes of the acclaimed Amazon drama The Man in the High Castle, based on the classic Philip K. Dick novel. Launched in the UK, US, Germany and Austria in 2015, the show quickly became Amazon’s most viewed drama series ever and is now in its third series.

Spotnitz shared three Golden Globes for Best Drama Series and a Peabody Award for his work on The X-Files. He was also nominated for an Emmy Award for writing and three times for Outstanding Drama Series.

For more information about ticketing, parking, or other commencement events and information, please visit the UCLA Commencement website.

Students with questions about College Commencement or academic eligibility to participate may direct their inquiries here: http://www.college.ucla.edu/commencement/help/contact/.