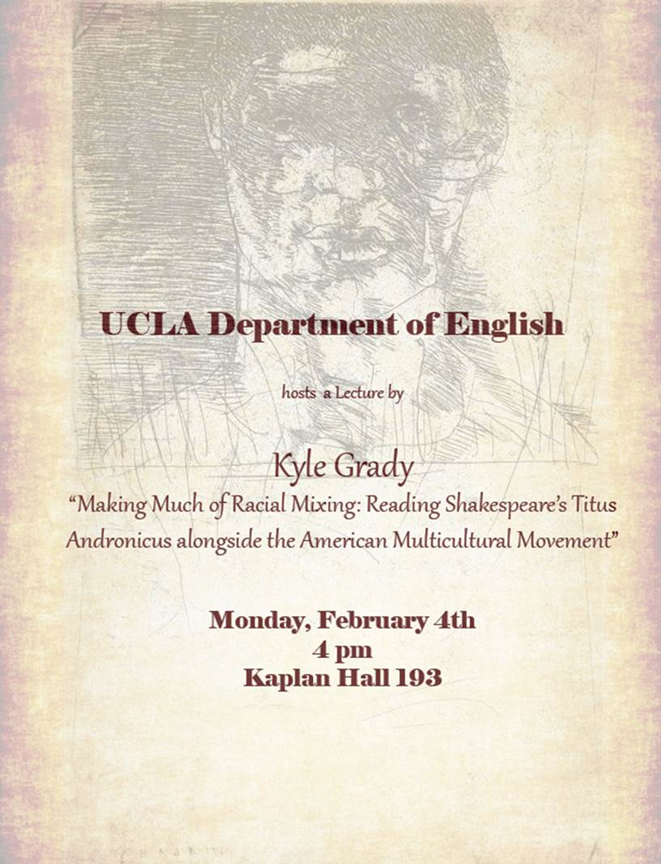 Kyle Grady is a UCLA Chancellor’s Postdoctoral Fellow. His work explores intersections between the study of early modern English literature and culture and the study of African American literature and culture. His current book project rethinks representations of black ascendency, racial mixing, and interracial cooperation in Elizabethan and Jacobean drama, using work from the African American tradition to explore how racism operates in moments of competing tolerance and intolerance. His work has appeared or is forthcoming in the journals Early Modern Culture, Pedagogy, Shakespeare Quarterly, and Shakespeare Studies.

This talk examines how popular approaches to racial mixing obscure quotidian histories. In contemporary America, the Multicultural Movement worked to bring mixedness back into the popular consciousness, but it also helped give rise to post-racial beliefs that racial mixing — particularly between black and white people — offered a salve for the intransigent racism of the past. Such a perspective hinges on the notion that mixedness is new, even while the work of iconic writers like Frederick Douglass reveal it to be a centuries-old reality of American demographics. In this talk, I argue that such misconceptions about racial mixing are not isolated to the American example. Early modern accounts of interracialism between English and African people often took a similar approach, linking racial mixing to drastic and impending cultural consequences. I read Shakespeare’s Titus Andronicus — a play that refers to racial mixing as an “experiment” — alongside the example of the Multicultural Movement to demonstrate how sensationalized accounts about racial mixing belie histories that are both mundane and problematic. In conjunction with exploring lesser-known early modern histories, this talk considers what it means to examine a historical period that held misconceptions similar to our own.