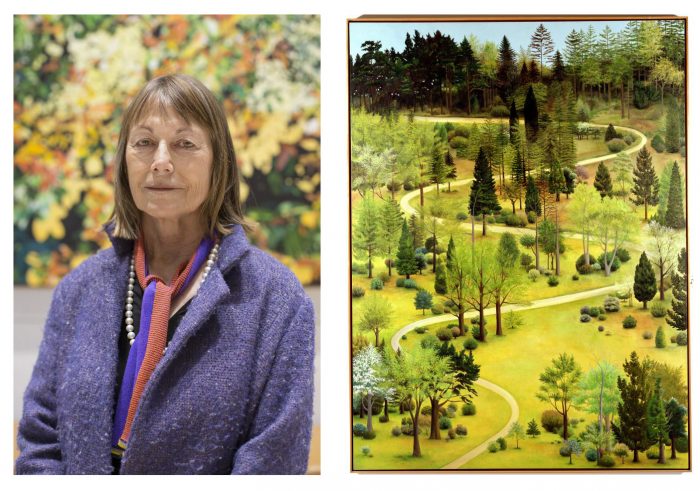 Astrid Preston, a long-time member of the Friends of the English, and a graduate of UCLA’s English department, has recently exhibited her paintings at the Bakersfield Museum of Art.  Her exhibition, “Poetics of Nature,” a 30-year survey, occupied the BMoA’s central gallery from Sept. 2017 through April 2018.  Additionally, Astrid has recently shown her work at the Craig Krull Gallery in Santa Monica (Fall 2017), the R.B. Stevenson Gallery in La Jolla (Summer 2016), as well as previous exhibitions at both of these prestigious galleries during the winter and spring of 2015, respectively.

Switching majors from Mathematics to English during her second year at UCLA, Astrid began developing relationships between form and concept as an undergraduate that continue to inform her paintings today.  Viewers first encountering Astrid’s work will no be doubt be surprised to learn that she is entirely self-taught, having never studied panting formally, mastering her craft independently for more than three decades.

A key aspect of Astrid’s artistic approach involves the pursuit of both non-verbalized emotions and candidly palpable concepts. In doing so, Astrid likens her paintings to poems, rather than visual illustrations. Consequently, Astrid’s images ply an intriguing convergence of recognition and discovery, recognizable as they are surreal, and rooted in a love of literature that she’s maintained since childhood.  Astrid’s moving landscapes revel in a paradox of concrete abstractions—simultaneously elusive and captivating—like secretly obvious clues leading the viewer both from and toward forgotten memories that stir, stun, and galvanize all at once.  A vivid evanescence is written beneath each of them.

Astrid’s next exhibit, “Echoing Light,” will run from June 16-July 24 at the R.B. Stevenson Gallery in La Jolla.  Interested readers can also visit her website: http://astridpreston.com/