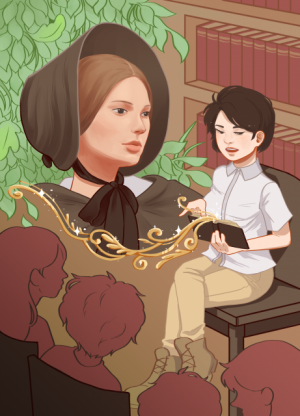 Over the course of 24 hours, readers will take turns reading the entirety of “Jane Eyre” and “Wide Sargasso Sea,” passing around books rather than a baton.  The event will begin Tuesday at 9 a.m. and will continue until the two books are complete, with students, professors and members of the Los Angeles community scheduled to read out loud in 10 minute shifts until 9 a.m. Wednesday.  The marathon’s design adds new communal dimensions to the experience of reading, and aims to redefine participants’ understanding of what literature can be through discussions of current events that relate to the stories, said UCLA English department chair Lowell Gallagher.

“In some ways, it is like a piece of installation art that we’re creating – this shared collective reading of a great work of literature that brings people into the act of listening to a story being read aloud over a considerable space of time,” Gallagher said.

UCLA’s English department first began hosting marathon readings in 1996, tackling epic novels such as “Moby-Dick” and “Ulysses.” The readings grew in popularity, attracting guests that ranged from actor John Lithgow to Rosa Parks. However, when the English department was relocated from Rolfe Hall to the Humanities Building following the 2005 Marathon Reading, it stopped hosting the event, Gallagher said.

The department revived the event last year with a reading of “Beloved” and has since worked to renew interest in marathon reading by gradually building the event back up in prominence and scale. English graduate student and event co-chair Cailey Hall said the decrease in popularity may have occurred in part because the attention span of potential participants has diminished from earlier marathon readings because of increased pressures to maximize one’s personal time.

“I think that people are somewhat less willing to spend time sitting around listening to works of literature being read aloud … and I think people feel like they have a lot more pressures on their time,” Hall said. “That approach to things trickles down and makes people less willing to actually sit and be present and enjoy something.”

This year’s Marathon Reading will attempt to attract readers and hold their attention in a variety of ways, including through audience activities related to the books, Hall said. Attendees will have the chance to color in pictures of scenes from “Jane Eyre,” and one graduate student will conduct palm readings inspired by a scene in the book, in which the character Mr. Rochester disguises himself as an old woman and reads his guests’ palms.

The organizers purposefully chose “Jane Eyre” and “Wide Sargasso Sea” to foster larger conversations about feminism and mental health, said English graduate student and Reading Marathon co-chair Bethany Johnsen. Although the books were picked by the organizers of last year’s event, Johnsen said the pairing contained added meaning after the resurgence of the #MeToo movement in October 2017.

“Jane Eyre” explores the power dynamics of a poor woman who gets involved with her wealthy employer, Mr. Rochester, and asks readers to reconsider whether or not their relationship is romantic or exploitative, Johnsen said. On the other hand, “Wide Sargasso Sea” – written by Jean Rhys as a prequel to Charlotte Brontë’s novel –reimagines the story of Mr. Rochester’s wife, Bertha Mason. In “Jane Eyre,” Bertha is considered by Mr. Rochester to be insane and is locked in the attic, but “Wide Sargasso Sea” reimagines her as a displaced and emotionally isolated Creole heiress, bringing in discussions of mental health and racism, Hall said.

Johnsen said the ages of “Jane Eyre” and “Wide Sargasso Sea” – first published in the mid-19th and mid-20th centuries, respectively – were taken into consideration when selecting the books for this year’s event. Marathon Reading provides a platform to celebrate and discuss books that aren’t necessarily viewed in the current cultural spotlight, and connect them to students’ lives, Johnsen said.

“We actually wanted to bring attention and appreciation to things that are a little older and don’t get press anymore … and open people’s eyes to the fact that something written 150 years ago or in the 1960s can still speak to the current cultural moment,” Johnsen said.

The event also aims to make the classical books more accessible for students, both by reframing the literature in terms of modern-day relevance and by encouraging participants to drop in throughout the day – between classes and meetings – to observe the reading for as long or as short a time as they like.

“One of the values of it is that it also helps to bring the activity of reading literature into the rhythm of an ordinary day on campus,” Gallagher said. “It really speaks to a public humanities goal, which is to make literature much more available in sometimes surprising ways.”

Hall said she hopes the event will attract students of all majors and years and help redefine their perception of so-called “serious literature:” While many perceive older stories to be limited for classroom use only, the marathon reading aims to create different forms of engagement with the text.

“We just hope people will come together and realize that literature is something that can be fun and shared with other people,” Hall said. “Generally, we sit around awkwardly and silently and do our own work by ourselves, and this is a chance for us to come and be awkward and be just slightly less silent together.”