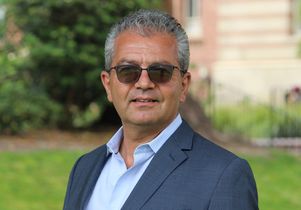 Ali Behdad began his academic career with the hopes of specializing in Persian literature. In the decade following the U.S. hostage crisis in Iran, however, a dearth of research and professional opportunities led him to the discipline of comparative literature, rather than focusing more narrowly on a single literary tradition.

In July, Behdad, who has been a professor of English at UCLA since 1993, became director of the Center for Near Eastern Studies in UCLA’s International Institute. As the center’s new director, Behdad said he aims to promote collaborative interdisciplinary research that advances knowledge of the complex history, culture and traditions of the Middle East.

“I think that an interdisciplinary approach to knowledge is really where we can produce new insights,” said Behdad, who has written about travel literature, postcolonial theory, immigration in the United States and photography in the Middle East. “Sometimes it takes a spirit of what Edward Said called ‘amateurism.’ But importantly, amateurism is not about being a dilettante. Amateurism means having curiosity and being always genuinely interested in expanding your own knowledge as if you were a new student.”

Behdad hopes to lead the center to think about the Middle East in a global context, one that takes into account both the region and its many diasporas. In his latest book, “Camera Orientalis,” Behdad makes a number of compelling arguments, among them, that photography in the Middle East is an essential aspect of the history of photography. Photography played a large part in colonial involvement in the region, with members of French, British, Italian and Russian foreign delegations photographing royalty and everyday people in many countries, including in Iran. “I’m excited about shifting ways of thinking about the region from what I would say is a discourse of crisis to one that represents the Middle East as a region defined by change.”

Read the full story on the UCLA International Institute website.