What Shakespeare Says about the Refugee Experience

“Shakespeare’s Plays, Refugees’ Stories” kicked off the department’s efforts on October 23-24, 2018. The two-day, multidisciplinary event highlighted the work of Jessica Bauman, a New York director whose recent adaptation of Shakespeare’s As You Like It featured refugees as actors and storytellers.

“Move like you’re tired,” Bauman instructed those of us gathered in an open space in Kaplan Hall. Bauman regularly teaches drama workshops for refugee communities in New York City and taught theater at a refugee camp in Kenya in 2016. On this particular Wednesday morning, she was leading a pedagogy workshop for UCLA graduate students and faculty on using theater to create an inclusive classroom.

Bauman soon gave a different instruction: “Move like you’re being followed.” We picked up our pace and glanced nervously over our shoulders. Some participants skittered around the periphery of the room, while others hid in a group of colleagues.

“Now, move like you’re tired and being followed.” We had heard Bauman’s newest instruction, but we hesitated with the execution. What does it feel like to be pursued while battling exhaustion? How do we represent this combination of urgent self-preservation with depleted energy and resources?

Bauman uses movement exercises like this one to help her students imaginatively enter Shakespeare’s plays. Some of her students are teachers and scholars of Shakespeare, as we were. Some are professional actors. Others are refugees and immigrants. Regardless of her students’ background, Bauman helps them connect with the universal human experiences expressed in theater.

Bauman’s most recent production, Arden / Everywhere, used a combination of professional actors and refugees to retell the story of Shakespeare’s As You Like It.  Instead of imagining Shakespeare’s Arden as a philosophical fantasyland for princesses, Bauman depicted Arden as a space for outcasts displaced from their homes. The sixteen actors in the 2017 cast represented nine different countries.

During her visit to UCLA, Bauman discussed her experience directing Arden/ Everywhere and teaching theater in refugee communities. She facilitated workshops on teaching Shakespeare in accessible ways and led a discussion with “No Lost Generation,” an undergraduate student organization that advocates for refugee populations. She also gave presentations for faculty and graduate students on adapting Renaissance drama for contemporary audiences and about socially engaged performances of Shakespeare.

For participants in “Shakespeare’s Plays, Refugees’ Stories,” As You Like It will never be the same. The play is among Shakespeare’s most philosophical, but Bauman suggested finding a new story within the text. Bauman explains, “Two women are banished from the court and must live among others who find themselves outcast from civilization. This is a story about refugees.”

Lowell Gallagher, chair of the English department, was one of several Shakespeare professors whose perspective on As You Like It was changed by Bauman’s presentation. He says, “It’s interesting to consider what other plays in the Shakespeare canon might have this potential for presenting a story apart from the one that has traditionally been told.” 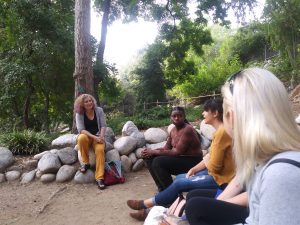 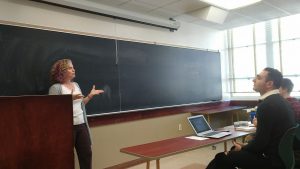 Bauman explains the difference between reading Shakespeare as a literary scholar and as a director to an undergraduate Shakespeare class.