Twenty-First-Century Fiction in a Neoliberal Age 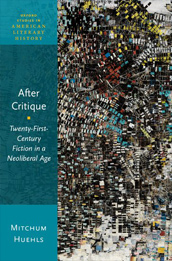 Periodizing contemporary fiction against the backdrop of neoliberalism, After Critique identifies a notable turn away from progressive politics among a cadre of key twenty-first-century authors. Through authoritative readings of foundational texts from writers such as Percival Everett, Helena Viramontes, Uzodinma Iweala, Colson Whitehead, Tom McCarthy, and David Foster Wallace, Huehls charts a distinct move away from standard forms of political critique grounded in rights discourse, ideological demystification, and the identification of injustice and inequality.

The authors discussed in After Critique register the decline of a conventional leftist politics, and in many ways even capitulate to its demise. As Huehls explains, however, such capitulation should actually be understood as contemporary U.S. fiction’s concerted attempt to reconfigure the nature of politics from within the neoliberal beast. While it’s easy to dismiss this as post-ideological fantasy, Huehls draws on an array of diverse scholarship–most notably the work of Bruno Latour–to suggest that an entirely new form of politics is emerging, both because of and in response to neoliberalism. Arguing that we must stop thinking of neoliberalism as a set of norms, ideological beliefs, or market principles that can be countered with a more just set of norms, beliefs, and principles, Huehls instead insists that we must start to appreciate neoliberalism as a post-normative ontological phenomenon. That is, it’s not something that requires us to think or act a certain way; it’s something that requires us to be in and occupy space in a certain way. This provocative treatment of neoliberalism in turn allows After Critique to reimagine our understanding of contemporary fiction and the political possibilities it envisions.