The Speculative Origins of U.S. Citizenship 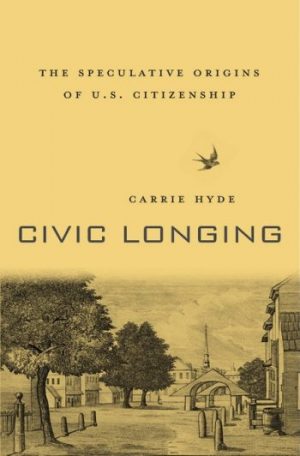 Congratulations to Carrie Hyde on the publication of her book Civic Longing: The Speculative Origins of U.S. Citizenship (Harvard University Press, 2018).  Civic Longing looks at the fascinating prehistory of U.S. citizenship in the years between the Revolution and the Civil War, when the cultural and juridical meaning of citizenship—as much as its scope—was still up for grabs. Carrie Hyde recovers the numerous cultural forms through which the meaning of citizenship was provisionally made and remade in the early United States.

Civic Longing offers the first historically grounded account of the formative political power of the imaginative traditions that shaped early debates about citizenship. In the absence of a centralized legal definition of citizenship, Hyde shows, politicians and writers regularly turned to a number of highly speculative traditions—political philosophy, Christian theology, natural law, fiction, and didactic literature—to authorize visions of what citizenship was or ought to be. These speculative traditions sustained an idealized image of citizenship by imagining it from its outer limits, from the point of view of its “negative civic exemplars”—expatriates, slaves, traitors, and alienated subjects. By recovering the strange, idiosyncratic meanings of citizenship in the early United States, Hyde provides a powerful critique of originalism, and challenges anachronistic assumptions that read the definition of citizenship backward from its consolidation in the mid-nineteenth century as jus soli or birthright citizenship.  In Priscilla Wald’s words, “ Civic Longing is a meticulously researched, elegantly written, and timely study of the early American conception of citizenship. Carrie Hyde shows persuasively how literature and literary analysis help to fashion the categories through which we imagine our affiliations. At a time when the humanities are under attack from a variety of sources, these carefully articulated and demonstrated claims are especially salient.”  Learn more here.