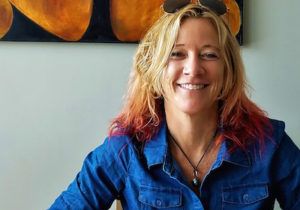 Congratulations to Elizabeth DeLoughrey, who has received two prestigious research awards, the University of California President’s Faculty Research Fellowship and a Rachel Carson Center for Environment and Society Fellowship at Ludwig-Maximilians-Universität, Munich, Germany.

The award-winning project, “Outer Spaces: Imagining the Ends of the Earth,” shows how climate change discourse relies on visualizing three extraterritorial or ‘outer spaces’ as vital to our ecological futures: the atmosphere, the ocean, and the poles. The project is organized around these three spaces, theorizing how literary and visual media work to bring immediacy to a climate crisis that is imagined outside of the ordinary places of human habitation. While many scholars have emphasized the newness and novelty of the Anthropocene, arguing that its visual, narrative, and material effects are unprecedented, Outer Spaces argues that there are vital Cold War origins to how we both understand and represent this new geological epoch. Cold War-era science, in particular, was fundamental to imagining a new epoch of anthropogenic climate change termed the Anthropocene. Turning to artists, writers, and photographers who have produced an ecological imaginary of these outer spaces, DeLoughrey draws from postcolonial methodologies to foreground the history of Cold War empire and to argue for the importance of the environmental humanities in helping us understand the mapping of the planet.  While on fellowship, DeLoughrey will examine the representation of Antarctica and the nuclearized atmosphere by indigenous artists and authors from Aotearoa New Zealand.