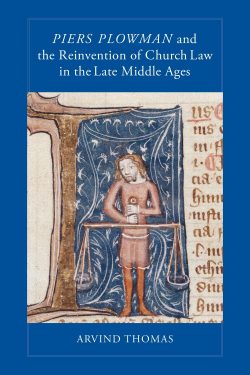 Professor Arvind Thomas’s book, Piers Plowman and the Reinvention of Church Law in the Late Middle Ages, has been published with University of Toronto Press.

It is a medieval truism that the poet meddles with words, the lawyer with the world. But are the poet’s words and the lawyer’s world really so far apart? To what extent does the art of making poems share in the craft of making laws, and vice versa? Framed by such questions, Piers Plowman and the Reinvention of Church Law in the Late Middle Ages examines the mutually productive interaction between literary and legal “makyngs” in England’s great Middle English poem by William Langland.

Focusing on Piers Plowman’s preoccupation with wrongdoing in the B and C versions, Arvind Thomas examines the versions’ representations of trials, confessions, restitutions, penalties, and pardons. Thomas explores how the “literary” informs and transforms the “legal” until they finally cannot be separated. Thomas shows how the poem’s narrative voice, metaphor, syntax and style not only reflect but also act upon properties of canon law, such as penitential procedures and authoritative maxims. Langland’s mobilization of juridical concepts, Thomas insists, not only engenders a poetics informed by canonist thought but also expresses an alternative vision of canon law from that proposed by medieval jurists and today’s medievalists.