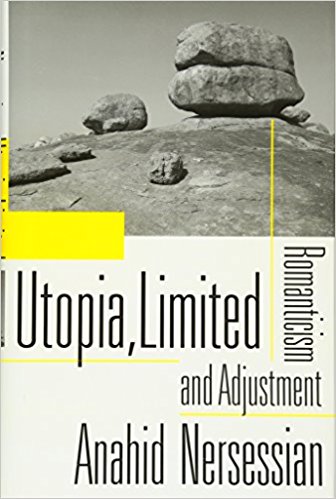 What is utopia if not a perfect world, impossible to achieve? Anahid Nersessian reveals a basic misunderstanding lurking behind that ideal. In Utopia, Limited she enlists William Blake, William Wordsworth, John Keats, and others to redefine utopianism as a positive investment in limitations. Linking the ecological imperative to live within our means to the aesthetic philosophy of the Romantic period, Nersessian’s theory of utopia promises not an unconditionally perfect world but a better world where we get less than we hoped, but more than we had.

For the Romantic writers, the project of utopia and the project of art were identical. Blake believed that without limits, a work of art would be no more than a set of squiggles on a page, or a string of nonsensical letters and sounds. And without boundaries, utopia is merely an extension of the world as we know it, but blighted by a hunger for having it all. Nersessian proposes that we think about utopia as the Romantics thought about aesthetics—as a way to bind and thereby emancipate human political potential within a finite space.

Grounded in an intellectual tradition that begins with Immanuel Kant and includes Theodor Adorno and Northrop Frye, Utopia, Limited lays out a program of “adjustment” that applies the lessons of art to the rigors of life on an imperiled planet. It is a sincere response to environmental devastation, offering us a road map through a restricted future.