Additional Information
Helen Deutsch teaches and researches at the crossroads of eighteenth-century studies and disability studies, with particular emphases on questions of authorship, originality, and embodiment across a variety of genres. Her ongoing research questions include the relation of eighteenth-century authors to classical models (in shaping literary style, authorial careers and gendered identities), the multifaceted connection between physical embodiment and literary form, the interplay between visual and printed cults of authorship and the phenomenon of author-love more broadly considered, and the formative relationship between bodily difference and modern individuality. In addition to the volumes listed above, some of her recent articles have considered the anecdote as literary “thing,” the exemplary queer intimacy of Jonathan Swift’s Stella poems, the formative role of disability in the construction of the eighteenth-century English canon, and the paradoxes of bodily individuality and moral exemplarity inherent in the history of the essay form from Montaigne to Randolph Bourne. Her recent graduate seminars have explored topics including the literary and cultural history of deformity, the eighteenth-century origins of the current academic preoccupation with “thing theory,” the philosophy and literature of friendship, and eighteenth-century lyric form.  In addition she regularly teaches a senior seminar on illness narrative and disability theory, as well as an introduction to disability studies. An NEH fellow in residence at the Huntington Library in the academic year 1998-9, she has served on the MLA Executive Committee of the Division of Restoration and Early-Eighteenth-Century English Literature, as a Member at Large on the board of the American Society for Eighteenth-Century Studies, as an advisory editor for PMLA and as a member of the MLA Committee on Disability Issues in the Profession. A proud Johnsonian, she is working on a two new book projects, one on gendered subjectivity, embodiment, and intimate literary forms such as the essay and the verse epistle, the other on the literary afterlife of Jonathan Swift, best exemplified by one of his most passionate readers, Edward Said. 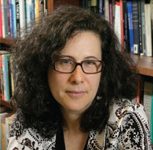