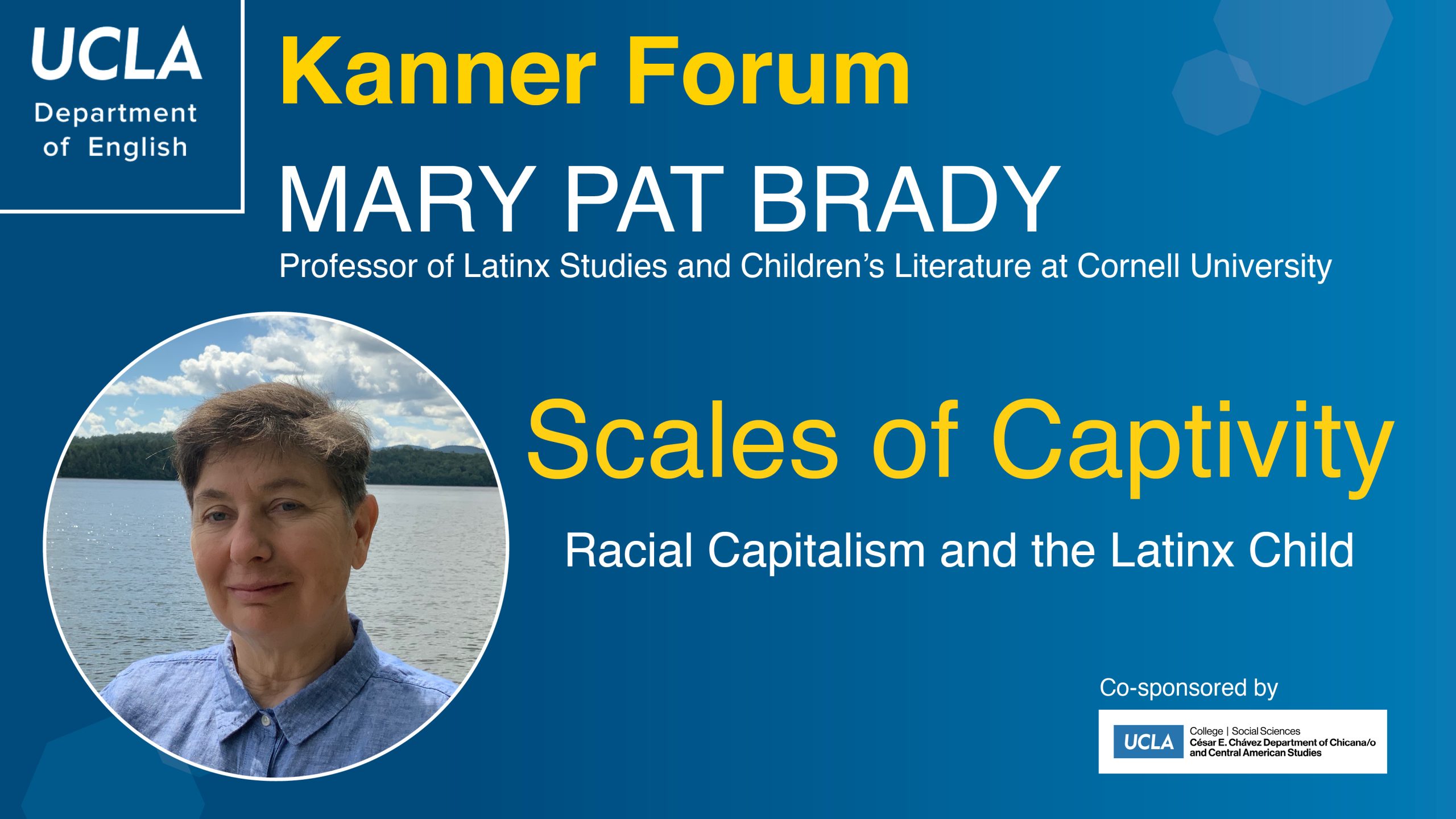 Join UCLA English for a conversation featuring Mary Pat Brady, Professor of Latinx Studies and Children’s Literature at Cornell University and author of Scales of Captivity: Racial Capitalism and the Latinx Child.  Professor Brady will be in conversation with Marissa López, Associate Graduate Dean and Professor of English and Chicana/o Studies at UCLA.

Register for this event here.

Professors Brady and López will discuss critical issues raised by Scales of Captivity including how the racialized conception of the child serves as a foundation for carceral logics.  They will explore the aesthetics of “scale” and its relationship to multiple racializing systems, and talk about how the figure of the captive child within Latinx literature offers methods for undoing the violence that scale enables.

This event is co-sponsored by UCLA’s César E. Chávez Department of Chicana/o and Central American Studies.

Mary Pat Brady teaches Latinx Studies and Children’s Literature at Cornell University and her new book, Scales of Captivity: Racial Capitalism and the Latinx Child, has just been released by Duke University Press. Brady is also the author of Extinct Lands, Temporal Geographies: Chicana Literature and the Urgency of Space (Duke University Press, 2002), which was awarded the Modern Language Association’s Prize for the Best Work of Latina/o and Chicana/o Literary and Cultural Criticism. She is also an associate editor of the sixth and seventh editions of the Heath Anthology of American Literature (Cengage) and is the editor of the 10 volume Gale Guide to 20th and 21st Century American Literature.  An earlier essay, “The Contrapuntal Geographies of Woman Hollering Creek and Other Stories” (published in American Literature in 1999) won the Norman Foerster Prize for the best essay published in that journal for 1999.

Marissa López is Associate Graduate Dean and Professor of English and Chicana/o Studies at UCLA, researching Chicanx literature from the 19th century to the present with an emphasis on 19th century Mexican California. Author of Chicano Nations (NYU 2011) and Racial Immanence (NYU 2019), she recently completed a year-long residency at the Los Angeles Public Library where she worked to collaboratively develop a mobile app, “Picturing Mexican America,” that uses geodata to display images of Mexican California relevant to a user’s location.

Per UCLA COVID-19 protocols, indoor masking and either proof of vaccination or recent negative test verification is required to attend this event.