Racial Immanence, Professor Marissa López’s new book, explores the how, why, and what of contemporary Chicanx culture 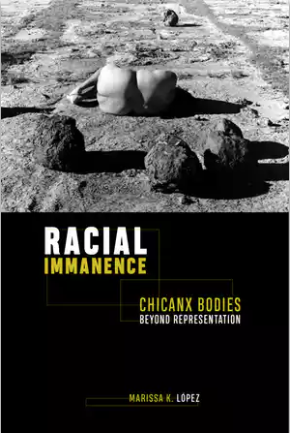 Racial Immanence attempts to unravel a Gordian knot at the center of the study of race and discourse: it seeks to loosen the constraints that the politics of racial representation put on interpretive methods and on our understanding of race itself. Marissa K. López argues that reading Chicanx literary and cultural texts primarily for the ways they represent Chicanxness only reinscribes the very racial logic that such texts ostensibly set out to undo.

Racial Immanence proposes to read differently; instead of focusing on representation, it asks what Chicanx texts do, what they produce in the world, and specifically how they produce access to the ineffable but material experience of race. Intrigued by the attention to disease, disability, abjection, and sense experience that she sees increasing in Chicanx visual, literary, and performing arts in the late-twentieth century, López explores how and why artists use the body in contemporary Chicanx cultural production. Racial Immanence takes up works by writers like Dagoberto Gilb, Cecile Pineda, and Gil Cuadros, the photographers Ken Gonzales Day and Stefan Ruiz, and the band Piñata Protest to argue that the body offers a unique site for pushing back against identity politics. In so doing, the book challenges theoretical conversations around affect and the post-human and asks what it means to truly consider people of color as writersand artists. Moving beyond abjection, López models Chicanx cultural production as a way of fostering networks of connection that deepen our attachments to the material world.