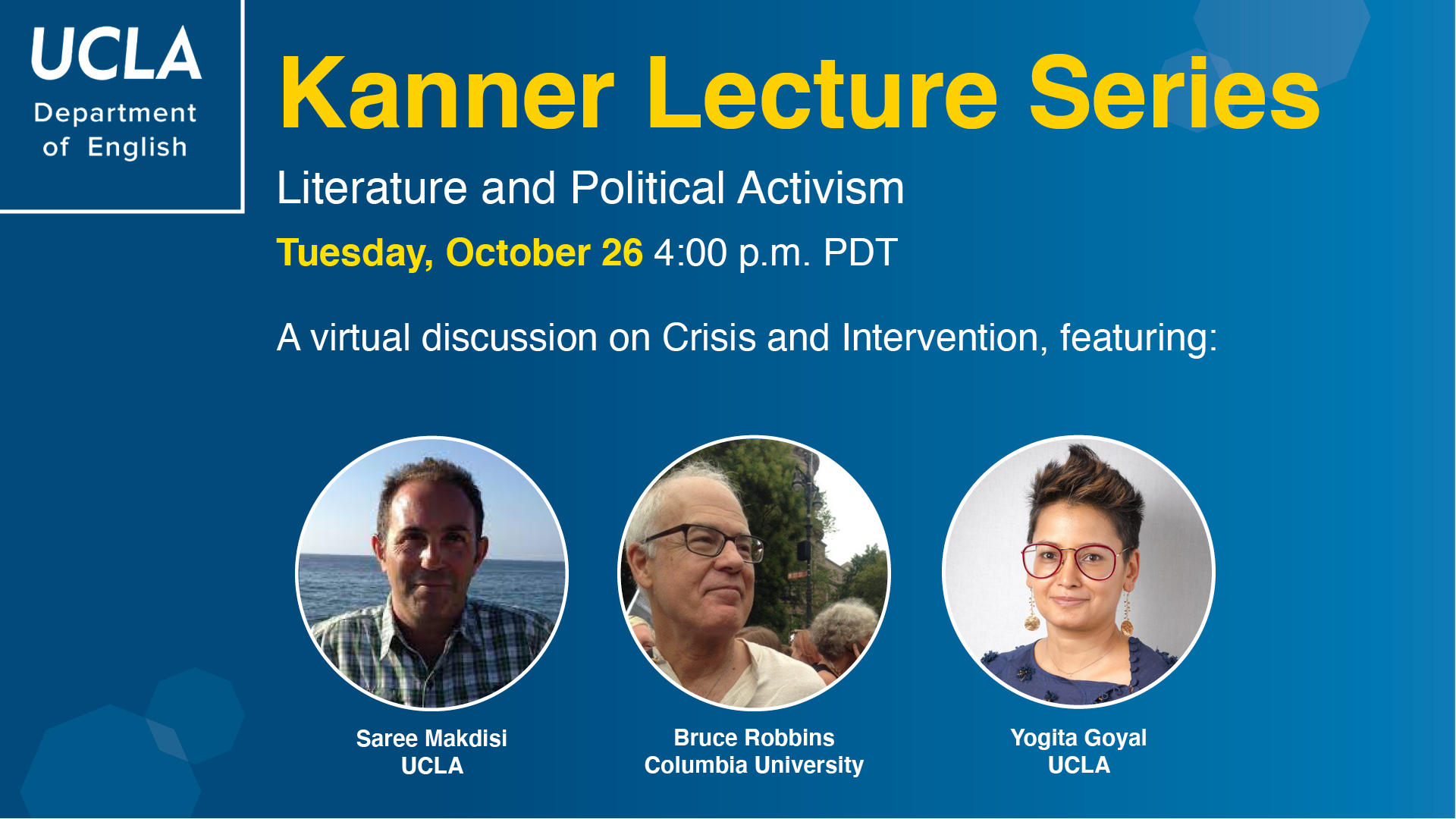 A Virtual Discussion on Crisis and Intervention

Register for this event:
https://ucla.zoom.us/meeting/register/tJIpdeytqjsiGtEL6PmtHsz-bfjXigy3KkNT

After registering, you will receive a confirmation email containing information about joining the meeting.

What is the work of literature and of literary scholars in helping us understand the crises of our times as well as possible forms of intervention? Join a conversation with Saree Makdisi, Bruce Robbins, and Yogita Goyal to discuss activism in the academy, the role of the public intellectual, and the ongoing legacies of colonialism in contemporary geopolitics.

Saree Makdisi is Professor of English and Comparative Literature at UCLA.  Professor Makdisi’s teaching and research are situated at the crossroads of several different fields, including British Romanticism, imperial culture, colonial and postcolonial theory and criticism, and the cultures of urban modernity, particularly the revision and contestation of charged urban spaces, including London, Beirut and Jerusalem. He has also written extensively on the afterlives of colonialism in the contemporary Arab world, and, in addition to his scholarly articles, has also contributed pieces on current events to a number of newspapers and magazines, including the Los Angeles Times, the Washington Post, the Guardian, and the London Review of Books.

Bruce Robbins is Old Dominion Foundation Professor in the Humanities at Columbia University, where he has taught since 2001.   He previously taught at the universities of Geneva and Lausanne as well as Rutgers University. Criticism and Politics: A Polemical Introduction is forthcoming from Stanford University Press. His other recent books are The Beneficiary (Duke), and Cosmopolitanisms (NYU), co-edited with Paulo Horta.  He is the director of two documentaries, “Some of My Best Friends Are Zionists” and “What Kind of Jew Is Shlomo Sand?”

Yogita Goyal is Professor of African American Studies and English at UCLA and editor of the journal, Contemporary Literature. Her most recent book, Runaway Genres: The Global Afterlives of Slavery (NYU Press, 2019), received the René Wellek Prize from ACLA, the Perkins prize from the International Society for the Study of Narrative and Honorable Mention for the James Russell Lowell Prize from MLA. Past President of A.S.A.P. (Association for the Study of the Arts of the Present), she has published widely on African diaspora, postcolonial, and American literature and is working on Aesthetics of Refuge, a monograph on twenty-first century refugee literature and culture.